People Before Profit: Another Form of Irish Republican Socialism

A new political front has emerged in Northern Ireland recently that has Sinn Féin worried, especially in West Belfast. Before the local council elections in 2014, few had heard of People Before Profit Alliance (PBP). Now in the Assembly elections of 2016, particularly in areas of North and West Belfast, there are PBP election posters everywhere. They currently have 3 TDs in Dáil Éireann, 14 councillors in local government in the Republic of Ireland, and 1 councillor in Northern Ireland who is Gerry Carroll from West Belfast.

Who are People Before Profit?

The name itself is nothing more than a cover name for the Socialist Workers Party (SWP) who established the group to contest elections both north and south of the border. SWP was formed in 1971 and is a far-left wing political party that espouses Irish republican socialism, Marxism, Trotskyism, and eco-socialism. SWP's original name was the Socialist Workers Movement (SWM) and was founded by the International Socialists of Britain living in Ireland at the time, who had also been members of Peoples' Democracy (PD). PD, formed by radical left-wing students at Queen's University Belfast, had been instrumental in creating civil rights protests in Northern Ireland in the late 1960s and organised the Belfast to Londonderry march in 1969 that lead to trouble breaking out near the village of Burntollet outside Londonderry. PD deliberately passed small Protestant villages in the hope of provoking a reaction.

The Socialist Workers Party do not hide their Irish republican socialist credentials. After the 'Love Ulster' riots in Dublin 2006, SWP released a press statement praising the actions of the rioters for attacking the Loyalist march in Dublin that day. The SWP has also stated that the only way for non-sectarianism to be realised is if Loyalists turn their backs on their ideals. Christy Moore, an Irish folk singer/songwriter and a very vocal supporter of the Provisional IRA campaign, even backed PBP in the forthcoming elections. 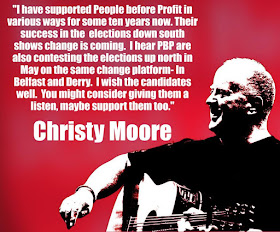 He also created and released albums in support of the hunger strikers in the 1980s, and also created the album "Spirit of Freedom", which was sold to generate money for PIRA.

One of the SWP leading activists is Eamonn McCann who is standing in the Foyle constituency in the forthcoming Assembly elections. McCann is a well-known individual from Londonderry and was deeply involved with the Northern Ireland Civil Rights Association. He took part in rioting in Londonderry in 1969 against the B-Specials and was an organiser of the NICRA march on Bloody Sunday in 1972.


Another well known activist who has been involved with PBP is Bernadette Devlin. Seriously injured in a loyalist assassination attempt at her home in the early 1980s and saved by British soldiers, Devlin does not hide her Irish republican views. She was a founding member of PD at Queen's in the late 1960s; took part in rioting against the police in 1969; and was a founding member of the Irish Republican Socialist Party (the political wing of the Irish National Liberation Army) in 1974, but later left over grievances that she had regarding IRSP control over the INLA.

After leaving the IRSP, Devlin got involved in the anti-H Block campaigns mainly organised by the Provisional Republican Movement and was a prominent leader in their campaigning for political status for IRA/INLA prisoners. It was during her time as a leader of the anti-H Block campaign that the Ulster Freedom Fighters (UFF) attempted to shoot her dead. She was shot fourteen times in her kitchen in front of her children at their home near Coalisland, Co. Tyrone but managed to survive. The UFF gunmen ripped out her telephone to prevent anyone from ringing an ambulance. Her life was saved when members of the Parachute Regiment commandeered a car and drove her to hospital.

Recently, Devlin has still been involved in politics. In 2007, she spoke at the dissident republican group Eirigi's annual James Connolly commemoration in Arbour Hill, Dublin. She is also involved with PBP.

Standing in West Belfast, PBP candidate Gerry Carroll poses a serious threat to Sinn Féin's republican hegemony, and Sinn Féin know this. Almost every leader of Sinn Féin, both north and south of the border, has canvassed for SF candidates in recent weeks. Canvassers have even dressed up in 1916 period costume when canvassing to remind voters of their republican ideals, even though they seem utterly ridiculous.

A while back, Gerry Carroll posted the following tweet: 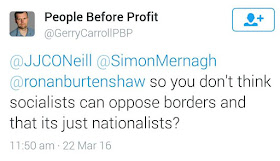 The tweet clearly demonstrates that Carroll is opposed to partition and thus supports Irish reunification, despite denying that he is a republican. Carroll also had the founding member of the IRSP, Bernadette Devlin launch his 2016 election campaign in Belfast. 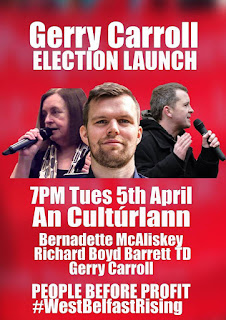 As well as a republican, Gerry Carroll is also a pro-Palestine activist: 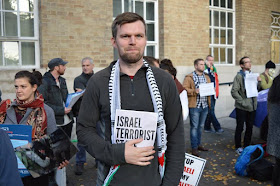 Interesting. Despite denying being a nationalist, Carroll clearly believes in Irish reunification as does PBP.

In North Belfast, PBP are running Fiona Ferguson for the Northern Ireland Assembly elections 2016. In spite of being relatively unknown and claiming to be non-sectarian, Ferguson does little to hide her pro-republican beliefs. Her Twitter feed provides some fascinating detail into her political beliefs.

Below are a number of screenshots that have been taken from her feed:

From these tweets, it is relatively clear that Ferguson does not hide her republican ideals in the same way other activists from PBP try to. Below is part of her election literature delivered around homes in North Belfast:

As well as writing some of her literature in English, part of the leaflet is also in Irish: a classic Sinn Féin ploy to win over some of the most hardline republicans in North Belfast. And like Carroll in West, Ferguson also had Bernadette Devlin launch her election campaign in North Belfast.

Fiona Ferguson has let the mask slip. Despite PBP claiming to be non-sectarian, Fiona and PBP members clearly remember Provo and INLA killers and are nothing more than Irish republican socialists.

It is clear that PBP are nothing but another mutated form of Irish republican socialism. Espousing the same politics as WP/OIRA, IRSP/INLA and other micro left-wing republican groups, PBP seek Irish reunification and the break up of the United Kingdom.
Dale Pankhurst at 12:02
Share